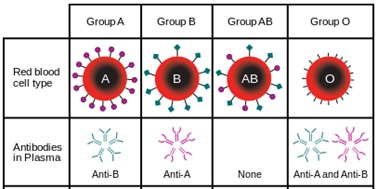 Human blood plasma from one individual contains antibodies to the antigens not present on the corresponding red cells. That is:

The idea of producing blood group A & B carbohydrate antigens able to fix anti A & anti B antibodies and use them to eliminate these antibodies from the plasma is not a new one and has already been patented a long time ago (Those patents have been in the public domain for already a very long time). However, the ability to produce in volume and in economically satisfactory conditions enough group A & B antigen sugars and graft them on the ad hoc support enabling efficient utilization in plasma or blood, did not exist until now. 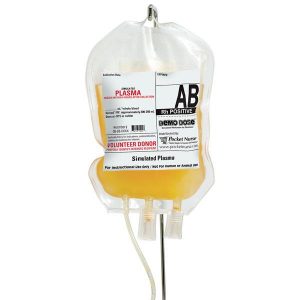 hanks to GlycoBAR patented technology, it is now possible to produce those blood group antigen sugars in volume at a price that is low enough to envision a world where only universal plasma, injectable to any patient would exist. Economy for hospital would be huge and risk of miss match with recipient blood group would be eliminated.

There are two ways of managing plasma. 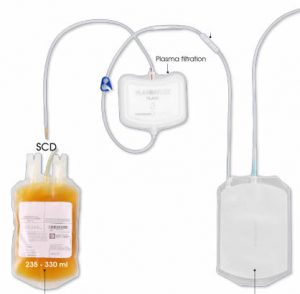 The first and most commonly used one is by using individual bags of plasma coming from individual donors (one donor = one bag). When plasma is collected, it is frozen, which is the reason why the name of this type of plasma is « FFP » for Fresh Frozen Plasma. With GlycoBAR technology, it is perfectly possible to design a filter to be included in the blood collection bag system so that antibodies are captured before the plasma is frozen.

The second one is by pool. This is when plasmas coming from thousands different donors are mixed in a pool of up to thousands liters, ready for an

industrial treatment in a pharmaceutical environment. In such a case, there are two possibilities of removing blood group antibodies from such a plasma pool. The first one is to use a chromatographic column where GlycoBAR antigen sugars are grafted on a chromatographic resin. The plasma goes through this column, blood group antibodies are captured in the column thanks to their affinity with the antigen ligands and after each pool the column is washed with an ad hoc solution in order to be reused for the next batch. Another option is to use our disposable BAR product, which is a cellulosic support on which the antigen sugars are immobilized. When mixed with the plasma, BAR product captures the blood group antibodies and is then filtered out and thrown away.